A Heart of Gratitude and Mr. Bob

There’s something about this season that brings out the gratitude in all of us. We are caught up in the anticipation and excitement of what’s to come and find ourselves full of joy more than any other time, but often when the stockings are down, the presents unwrapped, and the ornaments put away, we tend to go back to our usual ways and busyness of everyday life.

But what if thanks and giving wasn’t just for a holiday season but something we practiced all year long, regardless of our circumstances?  For Bob Harless, a 93-year-old husband, father, grandfather, many a great grandfather, and proud World War II Veteran, this is the case.

Mr. Bob’s story needs to be told, and it is one that has inspired our family and will surely inspire all of us to serve and love others well beyond the holiday season.

We first met Mr. Bob on our way to Washington, D.C.  He was peacefully sitting at the front of the airplane with beautiful crystal green eyes and a smile on his face.  Before I had even met him, it was clear he was full of joy.  Mr. Bob was proudly wearing his World War II hat, and throughout the flight we had time to thank him for his service and chat.

And did he sure love to chat. And encourage.

Even after we were off the plane, we connected in baggage claim and heard from Bob even more.  He was eager to see Washington, D.C. for the first time and visit the World War II Memorial, amidst many other amazing sites.  I can only imagine what feelings flooded through him as he visited a place that carried so many memories of people who have long been gone.  And as luck would have it, we were on the same flight back to Dallas with Bob and his sons.   He appeared more tired than at the start of the trip, but Bob was still eager to share stories and fill us with wisdom.  We came to find out that just hours before Bob left for his trip to Washington, D.C., he had been discharged from the hospital.  And much to his doctor’s dismay, Bob went on his trip with great anticipation.  Although he was so overjoyed to have taken this long awaited trip to D.C., there was no doubt he was tired.

But that is exactly who Mr. Bob is.  Although his body may be getting older and a little bit weaker than he used to be, his spirit, heart, and faith are only getting stronger with age.

Bob Harless was born in 1926 in a small Arkansas town.  He says one of his most favorite memories as a kid was when his parents sold everything and moved south to New Mexico.  It was an adventure and journey he’ll never forget, and I have a strong feeling, amidst the struggles to find a place to live and find work, this experience is a part of how he gained his spirit for adventure and thankfulness, no matter the circumstances.  He also learned early to cling close to those you love because it makes the unknown times full of so much good, and he reminded our family many times to do the same.

When World War II started, Bob was eager to come of age and serve his country.  It’s probably very obvious by now that Bob has a servant’s heart, so joining the Navy was only natural.  While aboard the transport ship USS Lycoming, Bob witnessed many things.  While serving in the South Pacific, he saw the devastation of the H-Bomb in Okinawa and was stationed in Pearl Harbor after the attacks.  Although Bob no doubt saw suffering and experienced it for himself, being a soldier during World War II is something he is very proud to share about. During this conversation, we noticed Bob was missing a finger. And with a sense of humor, he joked that he made it out of the war alive, but he had nothing against a table saw after.

Shortly after returning from war, Bob was working at a candy factory when a beautiful young lady standing at the dock caught his eye.  With confidence, and a sense of humor, Bob went up to this woman and told her he would marry her, to which she wrote off.  But after walking away briefly, Bob turned around and kissed her.  Her name was Lillie Mae, and two weeks later they were married.  Bob jokes that it was the kiss that changed her mind, but I have a strong feeling it didn’t take her long to see see his heart.  Bob and Lillie Mae raised four wonderful sons who, because of their father, also shared a passion for the military, and between the Army, Air Force, and Navy, all served in some way. 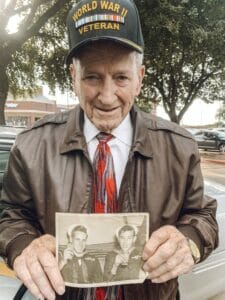 Bob proudly shares the turning point in his life was when he found Jesus, as did Lillie Mae.  Together on the same day, they both were baptized, and their lives were forever changed.  Each of their boys will tell you their parents’ marriage was a true love story and was one of the greatest gifts they gave their children.  And it is very clear how much their sons love and respect their parents. Bob and Lillie Mae have created a legacy that the Harless family continues to share. Bob said in his marriage disagreements and fights were sparse.  And it was not because their family was without struggles, but it was their perspective to fight for their marriage instead of their own right to be right.

Bob and Lillie Mae were married for 71 years until she passed away from complications of Alzheimers a few years ago.  In the last four years of her life, Bob would faithfully visit his dear wife every other day, sit by her side, tell her stories, and hold her hand.

Amidst many things Bob has done in his life, one of his favorite was being a painting contractor.  Bob joked that for 48 years he’d paint anything that didn’t move, and although he was thankful for a job he could take pride in, he said he most loved the opportunity to honor God and his family with the work he did.

That statement he shared has stuck with me.  How often do we not find joy and contentment in what we do and rather choose to see it as mundane? How often do we have so much yet want the one thing we don’t have? And how often are we looking for the next best thing when the exact thing we need and are called to do is right in front of us?

If there is anything, among the many, we can learn from Bob, it’s that each experience, both beautiful and hard, are not on accident.  They shape who we are, and we should appreciate every bit of life’s moments. They are not only opportunities to grow but chances to love and serve others.  There is joy and goodness everywhere, and if our eyes and ears are open, we just might see it.

This holiday season when it’s easy to get lost in the busyness, let us do our best to pause and give thanks. And with a new year upon us, let us resolve to have a heart of gratitude and contentment.  We can’t always change our circumstances, but we sure can make them better if we choose to find the joy. 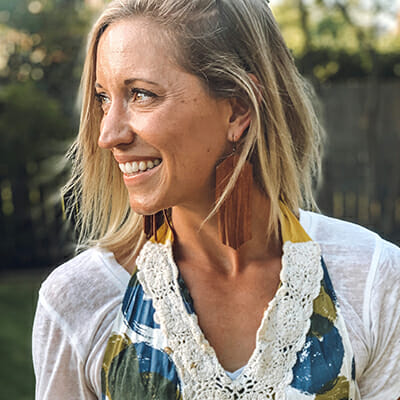 Hi y’all! I’m Lauren! I’m a native Texan with a heart for Oklahoma, and I’m a wife and mom to 4 very active little boys. In the chaos of life, I believe you can always find time to connect and find joy, however that looks. I especially love creating meals that bring people together to celebrate life’s little to big moments. I believe in exploring outside, getting to know your neighbor, being creative but not perfect, and embracing a heart of gratitude, which is why Carlton Landing is one of our favorite places to visit as often as we can. I am excited to share delicious recipes and unique ways to celebrate life with you! You can follow Lauren on Instagram @jones.family.table.

Oklahoma Road Trips: Where to Stop Next?