Carlton Landing’s 2nd annual Porchfest is almost here! An afternoon where porches become stages and the town is immersed in fresh tunes, art, food and fun. Everyone is invited to listen to a festival of music, each musician playing from a different front porch of a home here in town. Wander through town connecting with old friends and new faces, stop by a food truck for some finger-licking barbecue or peruse the art goods being offered by Oklahoma-based artists and sellers. Already a success in neighborhoods across America, this is fast becoming a Carlton Landing favorite!

This year, we have four Oklahoma-based and one Nashville-based band that will be belting tunes through the afternoon into the evening (full line up below). Food truck vendors will be on site serving their favorites. This event is BYOB and BYOChair, grab a trusty lawn chair or picnic blanket as we’ll be gathering on parks, streets and porches. 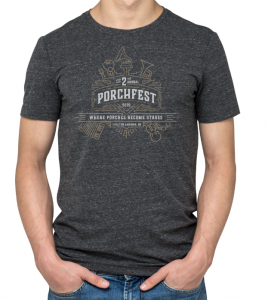 Pre-order a super cozy 2020 Porchfest t-shirt for this year’s event. All shirts are dark heather grey and will have the bands and sponsors highlighted on the back. T-shirts will be ready for pick-up at the event and ahead of the event in our Welcome Center on the corner of Park and Water Street. Order today at $20/shirt, day of the event will be sold at $25/shirt.

Maps are available in our Welcome Center & at the event

Having almost given up on music all together, Dakota Davis was getting ready to pursue a predictable career in physics until the death of a dear friend and musical collaborator shifted his perspective. He returned to the recording studio in his parents shed and worked tirelessly for months until his first album, “As A Creature of Temperature” was born. Following the album release, Davis recruited the help of Taylor Frederick and Shayln Borth to join at live performances and begin working on the next album as a full band. The trio will be travelling from Woodward Oklahoma to join us as the first band! Give them a listen here: Kauri on Spotify

Nightingale was formed right in the Heartland and is known for their soul-drenched blend of Americana influences. 2019 was a banner year for the group, including an invitation to perform at the Tulsa Boom Factory Official SXSW Day party and a successful Kickstarter campaign, officially making way for the group’s upcoming EP release. The project is scheduled for release on Leap Day – Feb 29th, 2020 and will showcase the nostalgic melodies, folk influences, and soulful vocals Nightingale is known for.

Braden Jamison is an 18 year-old singer-songwriter from Tulsa, OK who has entertained audiences of all ages in a variety of venues and settings from coffee houses to arenas. Braden lists George Strait, Merle Haggard, the Eagles, John Mayer and Ed Sheeran as his greatest musical influences and each can be heard in his music which has a unique sound of classic country with hints of classic rock, blues and soul.

Braden, a high school senior, is an accomplished athlete but music is his passion. He is currently spending time in the studio recording his first full album that will include the recently released singles, “Thanks, Man” and “Hometown Kid” (Feb 7th release) and “Blame It On The Night” to be released in April.  The album is scheduled to be released this Summer.

The Close is an acoustic Americana vocal trio from the southeast based in Nashville, TN. Shannon Walker, Lori J Rowton and James Mckinney are three lead singers, songwriters and multi-instrumentalists whose blend of genres and styles wrap around intricate three part harmonies reminiscent of The Eagles, Fleetwood Mac, CSNY and other harmony focused bands made of multiple writers. Their stellar and hauntingly beautiful harmonies blend together Americana/Contemporary Folk/Country with a commercial Pop sensibility. Currently, they are touring heavily to promote their debut Americana EP release, Hello Heart, available now. The Close was most recently featured on Roots Radio, WMOT’s Finally Friday Broadcast live from 3rd & Lindsley in Nashville, TN, and will be featured on the upcoming television series, The Southern Music Showcase that airs on BLTV. In 2020, The Close is partnering with Victor Records, famed maker of the Victrola Record Player from Victor/RCA Records, to record “The Close, Live from Victor Studios” at Victor recording studios to be released Spring 2020.

Dane & The Soup is an independent retro soul project based in Tulsa, OK that was formed in 2017. The band features vocalist Dane Arnold, guitarist Johnny Mullenax, bassist Jordan Hehl, drummer Chris Peters, trombonist Dominick Marcell Stephens, and trumpeter Bishop Marsh. Affiliated with Horton Records (Tulsa,OK), the band has released their debut single, Crown & Weed, on all digital platforms via The Orchard. The up and coming indie outfit will soon follow up with 5 other singles through out 2020.

In the case of rain:

Regardless of nature’s elements –except in extreme circumstances– the Porchfest celebration will go on! In the case of rain, check back here and/or on social media for any changes to the porch route. If it is raining on the day of, we will have ponchos for $1/each and encourage rain gear. As a reminder, this event is BYO Chair or seating (not a blanket in the case of rain!). We’ll see you there! 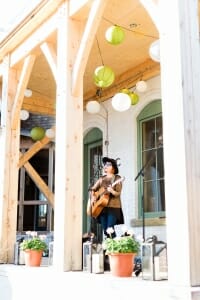 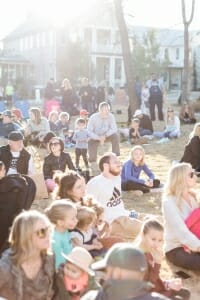 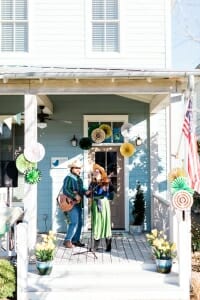 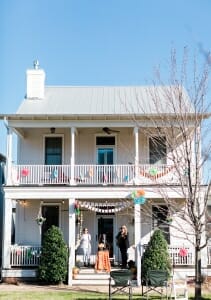 Live Music at The Meeting House

4th of July Movie Under the Stars: The Sandlot

Movie Under the Stars